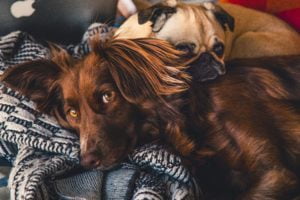 The subject line of the e-mail read “Please help” and the body of the email included a photo of two dogs sleeping on a bed with the words “we are at a hotel, he wants to kill us all”.

There was no phone number, no name, and no location included in the e-mail. The Pet Safekeeping Coordinator responded back to the anonymous e-mail with contact information for the Pet Safekeeping Program. Within minutes, a call came through from a young woman who we will call Lori. This is her story.

Lori was born in Nova Scotia and when she was 22, she met her abuser, who we will call Frank. The relationship started out like any other relationship. At first, he was thoughtful and affectionate but by the time they celebrated their one-year anniversary things had dramatically changed. Frank would control how she could dress and what she could eat. Name-calling, gas lighting, and yelling became daily occurrences. After losing his job, Frank became addicted to cocaine and crystal meth; that is when the abuse turned physical. Over the next several years, Frank would beat Lori so intensely that she would sustain broken bones, chipped teeth and scars along her arms. He was arrested for aggravated assault after an altercation with a police officer – he fled to Alberta to avoid jail time. When Frank relocated to Alberta he took Lori’s two dogs with him. He knew she would follow him anywhere the dogs went.

Mustang and Audi were both 10 years old and had been a part of Lori’s life since she was a young woman. They meant the world to her … and Frank knew that. Over the years whenever Lori would try to leave Frank, he would threaten to kill her dogs. He knew that as long as he had Mustang and Audi he could always control Lori.

While in Alberta, things for Lori and her two dogs took a dramatic turn for the worse. Lori and the dogs were isolated with no family or friends to call on for support, no income and no stable housing. Frank would monitor Lori’s mobile phone use and create countless fraudulent credit card accounts in Lori’s name. He would withhold food and veterinary care for the dogs. He would threaten to kill the dogs if Lori ever tried to leave. He would let the dogs loose in traffic and would laugh when Lori hysterically tried to call her dogs back. When he ran out of money for drugs, he would physically hurt the dogs and keep them hostage to force Lori into prostitution.

It took Lori several attempts to leave Frank for good. When she would leave, he would manipulate her to come back and the abusive cycle would continue.  The Pet Safekeeping Program coordinator worked with the family of three for almost 8 months and played an instrumental role in helping them relocate back home to Nova Scotia, without Frank.

Lori’s story is not unique.

The Alberta SPCA’s Pet Safekeeping Program was launched in 2014 to help find placement for pets while domestic violence victims entered into a safe shelter. Since its inception, the Pet Safekeeping Program has seen exponential growth, with the number of people and pets helped each year increasing by more than 400%. Clients are referred to the Program by a partner agency, and once accepted, the pets receive a full medical exam, vaccinations and other required treatments.

While there are different forms of abuse that occur in a broad range of relationships, a common occurrence in all of these abusive relationships is cruelty to animals at the hands of the abuser.

Refuge should be available to everyone. Anyone fleeing family violence with a pet should contact a local shelter or domestic violence agency to be referred to the Pet Safekeeping Program.